This past Wednesday Team Jeff hosted a local live day, with wrestlers from Columbus North, Jeffersonville, Jennings County, Merrillville, New Washington, and New Albany attending. Also in attendance was David Maldonado, a former NCAA All-American for Iowa State (teammate with wrestling legend Cael Sanderson) and inductee to the Indiana Sports Hall of Fame. In addition to his collegiate achievements, David Maldonado is currently the head coach at Merrillville and a former Indiana state champion. 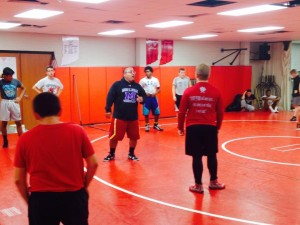 Overall, it was a big group with tons of accolades, including 2x state champion Shaun Shreck, current Indiana University heavyweight Gavin Jolley-Little, state placer Ethan Herron, state qualifier Noah Franklin, and five wrestlers that will be attending Fargo. Any local wrestlers missing this live day missed out on wrestling some of the best wrestlers in the state.

Be sure to follow Team Jeff on Facebook for information on the upcoming schedule as summer is coming to an end.