The last two weeks have been a very busy time for Team Jeff, with wrestlers competing all over the nation. The highlights are Coach Stith’s performance at the World Police and Firefighter Games, the Lindsey Wilson camp, and beach wrestling in Madison.

Jeffersonville firefighter and Team Jeff coach Josh Stith competed in the World Police and Firefighter games held in Fairfax, Virginia, taking first in freestyle and second in greco. In the last two games, he has brought home two freestyle championships and a second and third place in greco.

Lindsey Wilson Camp was a success

Team Jeff visited the Lindsey Wilson Intensity Camp, with wrestlers learning from some of the best wrestlers in the nation, including two time NAIA national champion Joey Cozart. Between practices, wrestlers visited the lake and relaxed. 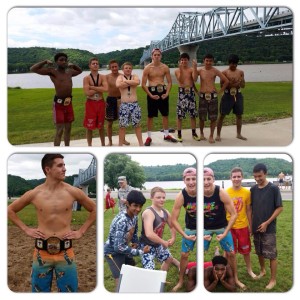 Seven Team Jeff wrestlers competed in the Indiana State Beach Wrestling Championships hosted in Madison. Every Team Jeff wrestler placed and the multiple champions received WWE-styled belts for their hard work. Overall, all the wrestlers had lots of fun and a great time. Thanks to Coach Somerville, Coach Stewart, and Coach Ferraro for taking wrestlers to Madison.

Wrestlers from Japan will be visiting from July 26 through July 29, with the highlight of the week being a Team Jeff pool party at the Jeff Aquatic Center. We need families to volunteer and help house the Japanese wrestlers, as they do the same when we send wrestlers to Japan. If you are interested, please contact Coach Struck.

With Fargo approaching and multiple Team Jeff wrestlers going, Team Jeff will be hosting a live night, July 15, to help prepare our and local wrestlers. Wrestlers from Jennings County, Merrillville, and other local schools will be attending, so be there!