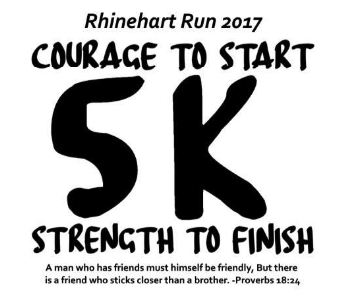 ELIGIBILITY: Adults and Children of all ages willing to WALK OR RUN in this event are encouraged to come participate.

LOCATION: Charlestown State Park — we will be running the same course that Coach Rhinehart led his JHS Cross Country teams through during his tenure as head coach.

COST – WHAT WILL I RECEIVE?: $20 includes your t—shirt when given by the 27th of October. To sign up after the 28th a $5 late fee will be charged, and we will get the shirt to you at a later date. Late order shirts can be picked up at Jeffersonville High School up to one week after the race date.

CANCELLATION/REFUND POLICY: NO REFUNDS after donation. If you donate, and can not attend, we will hold your shirt for 1 week after the race.

OTHER: Coach Rhinehart was a dog lover, feel free to run with your K9; keep them on a leash, and clean up after them

“Robby” Rhinehart, III a teacher and coach at Jeffersonville High School died on Wednesday, August 19, 2009. He was born March 1, 1975 in South Charleston WV. The son of Robert and Karen Rhinehart was married to Melissa Rhinehart, who survives. He was a Math Teacher, Wrestling and Cross Country Coach in West Virginia, Maryland, 2 years in Japan, an his last 3 years at Jeffersonville High School. Wh e at Jeffersonville he spent2 seasons as head cross country coach, 3 as assistant high school coach, and 3 as Team Jeff Wrestling club coach. Robby was active in the Indiana State Wrestling Association 2 Women’s nationals teams, 2 Folkstyle National teams, and 1 team to Japan. Jeffersonville School won their first HHC championship In over 20 years, and first 2 sectional titles in over 15 years once he arrived. Robby was a 2x West Vi state qualifier in wrestling, and ran cross country in college.

Donations for his memory will aid a CHRISTIAN WRESTLER in their college pursuits as well as help provide wrestling opportunities for the youth of the Jeffersonville Community.